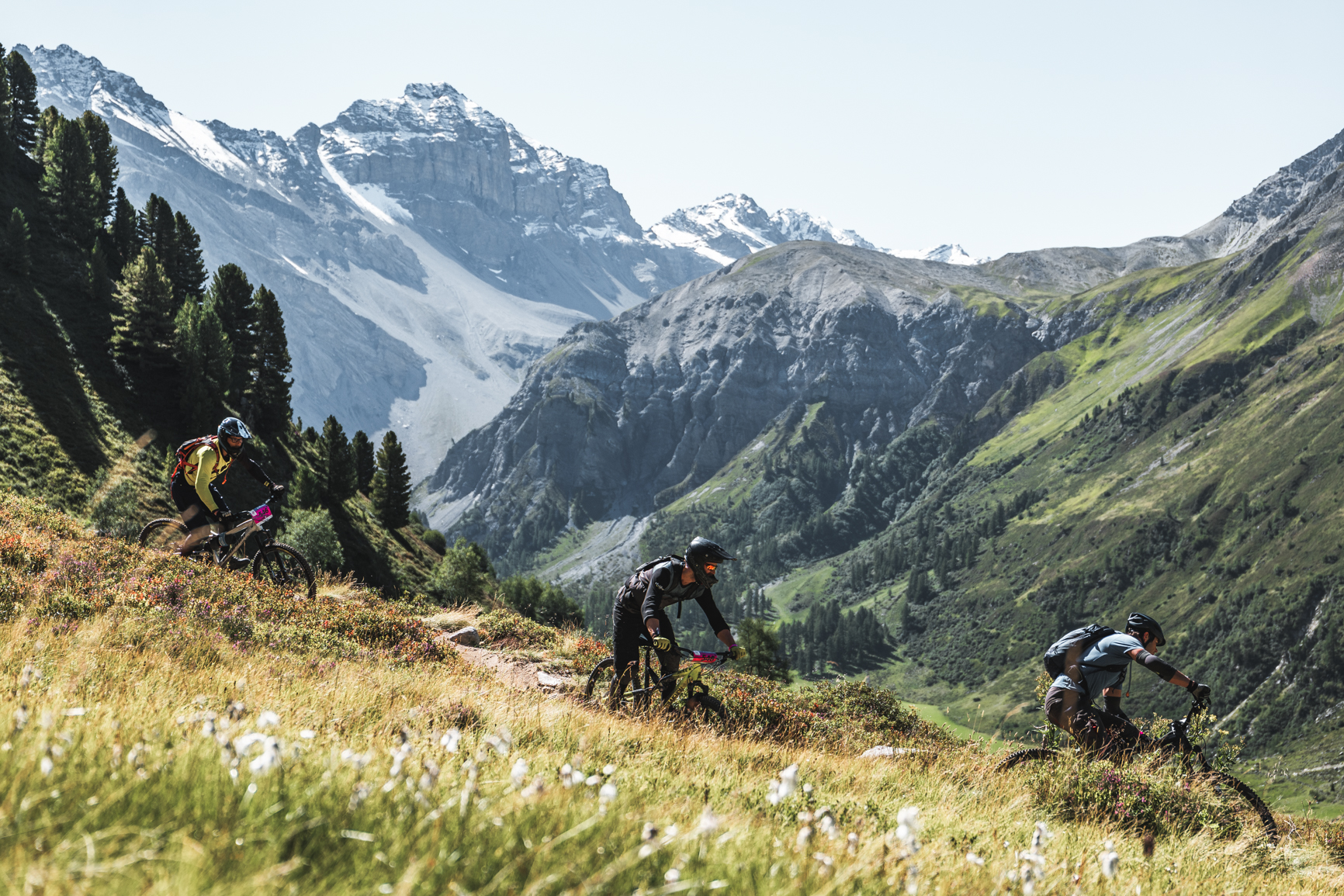 From 2nd to 4th September 2021, the international enduro mountain bike scene met in Davos, Switzerland, for the already 5th edition of MONDRAKER ENDURO TEAM, a race for teams with an extremely high fun factor. At best conditions with lots of sunshine and great mountain panoramas, the 450 riders enjoyed the alpine racing adventure on the first-class trails around the destination of Davos Klosters and the extraordinary camaraderie within the international mountain bike community. The teams of two in particular had an exciting competition, but also the open category FUN TEAM, which was launched last year for teams of three to six people with even greater focus on fun, has proven to be very successful.

Three days of sunshine, first class trails and best mountain panoramas – the event and the Davos Klosters region were once again very well received by the international participants: "So varied trails I don’t know anywhere else. On the same morning we rode through moonscapes, over rocks, through muddy terrain, over wooden bridges and root trails – absolutely amazing! And all that with a dreamlike view", says an experienced racer from Holland, who is in Davos for the first time. "The event atmosphere is simply unique, almost familiar. And since we ride in a team, we can even share our huge joy." This was the unanimous feedback of nearly all the 450 riders from 17 nations, who have covered 14 timed stages on their bikes during the last three days. On the transfer stages in between, often supported by mountain railways, the clock was stopped and the riders had time to chat with participants from foreign countries and enjoy the international mountain bike community and the impressive alpine scenery of the Grisons mountains. In short – a lot of mountain bike fun! The finish was also something special – for the first time, the final stage was on the brand new Bolgentrail, leading directly into the event area. The atmosphere in the finishing area was just breath-taking.

Category FUN TEAM stands for core idea of the event
For the second time, teams of three to six people were able to compete in the open category FUN TEAM. The still new category, which symbolizes the core idea of the event, was surprisingly popular: it was sold out within only three days. About 40% of the participants rode in 45 varied fun teams. They appreciated and enjoyed competing as a larger group in this total fun category instead of just a team of two. "Normally, we ride single races. But here, the focus lies on having fun with our bike buddies. We find the category FUN TEAM absolutely great", says a young German team of four. "Riding as part of a team of four also presents a whole new set of challenges. You have to coordinate and work together a lot more. That’s a really cool experience!" Next to this, the fast teams of two put up a tough competition, at least on the track. "We always have ambitious riders with us, who go full gas as soon as they have a starting number on the handlebar," says organizer Britta Wild. "Off the racetrack, they immediately become mates again and help each other repairing flat tires."

Kupferschmied sisters with victory in third attempt
In the Men's category, the Bixs Factory Team with Stefan Peter and Mirco Widmer from Zug lived up to their role as favourites and won with 1h 08min 12sec and almost two and a half minutes ahead of the Scots Chris Hutchens and Christo Gallagher from The Contour Collective. Team Gailas soccas with Tobias Spescha and Ronny Caduff from Flims came in third.
In the women's category, the Swiss MTB Girls Ramona and Jennifer Kupferschmied finally succeeded in their third attempt: After finishing in second place for the last two years, the sisters from Schliern b. Köniz finally took the victory with a time of 1h 27min 32sec, with a clear lead over the runners-up Claire Fiebig and Alexa Hüni, Team Stadl Racing, from Friedrichshafen. “All good things come in threes”, said the Kupferschmied sisters after the race. “This time we took a much more relaxed approach than in previous years, according to the motto just for fun, and so we really got into the flow! Above all, we wanted to enjoy this cool event. And it worked out!” Third place went to the Dutch-Belgian Swooth LT team with Laura Turpijn and Kristien Achten.
In the mixed category, Team Fett und Langsam with Birgit Bless and Fabian Füglister from Baden proved its name wrong and took a commanding start-to-finish victory. Second place went to Andrea Kiser and Reto Haas from Sarnen from the rideunderwood mixed team. Third place went to the Danish team First Name Last Name with Tom Folkmann and Anne Bodker.
In the 77+ category of older riders, Team DoubleUrs with Urs Pargmann and Urs Stadelmann from Lenzerheide/Lichtensteig clearly took the victory. Second place went to the Old Brothers Fredy Rohrer and Iwan Arnold from Altorf, third place to Team Fusionworld.ch / BikeHub.ch with Anthony Mayr and Johannes Riebl from Sarnen.
In the FUN TEAMS category, which was only held for the second time, the 3-man team Velobude Racing from Flaach took the victory, closely followed by Double-A and the half Tanner Twins from Häusernmoos and Eriswil, who originally wanted to start as favourites in the 77+ category, but due to bad luck with injuries joined together at short notice as a FUN TEAM of three. Third place went to last year's runners-up, the three Flying Hamsters from Geneva.
Despite the hard fights on the course, everyone agrees: winning is secondary at this fun team event – because the main prize at this race is simply a big grin on your face, and everyone can get that.

Conclusion: Returning participants as biggest compliment
The organising committee draws a completely positive conclusion: "Our goal at MONDRAKER ENDURO TEAM is to show experienced mountain bikers the most beautiful trails of the Davos Klosters destination," summarises race director Michi Wild. "We succeeded in doing this again this time. It was again a fantastic mountain bike festival – und the greatest compliment is, that lots of riders come to our event again and again. Many of them were already here for the fifth time. And that’s something we can really be proud of!" Loyalty includes not only the riders, but also the organizers and volunteers. "Our experienced team had to be very flexible this time as well, but everything worked out. Plus, the Davos Klosters mountain railways, which make the event possible thanks to their transportation network, also gave us great support again!" The biggest thank you goes to the 60 volunteers, without whom the event could not have taken place.

Sixth edition from 1st to 3nd September 2022
Next year, the established fun race MONDRAKER ENDURO TEAM for experienced mountain bikers in Davos Klosters will take place again, from 1st to 3rd September 2022. You can register on our website towards the end of 2021. The exact date of the registration opening will be announced on our channels early enough. 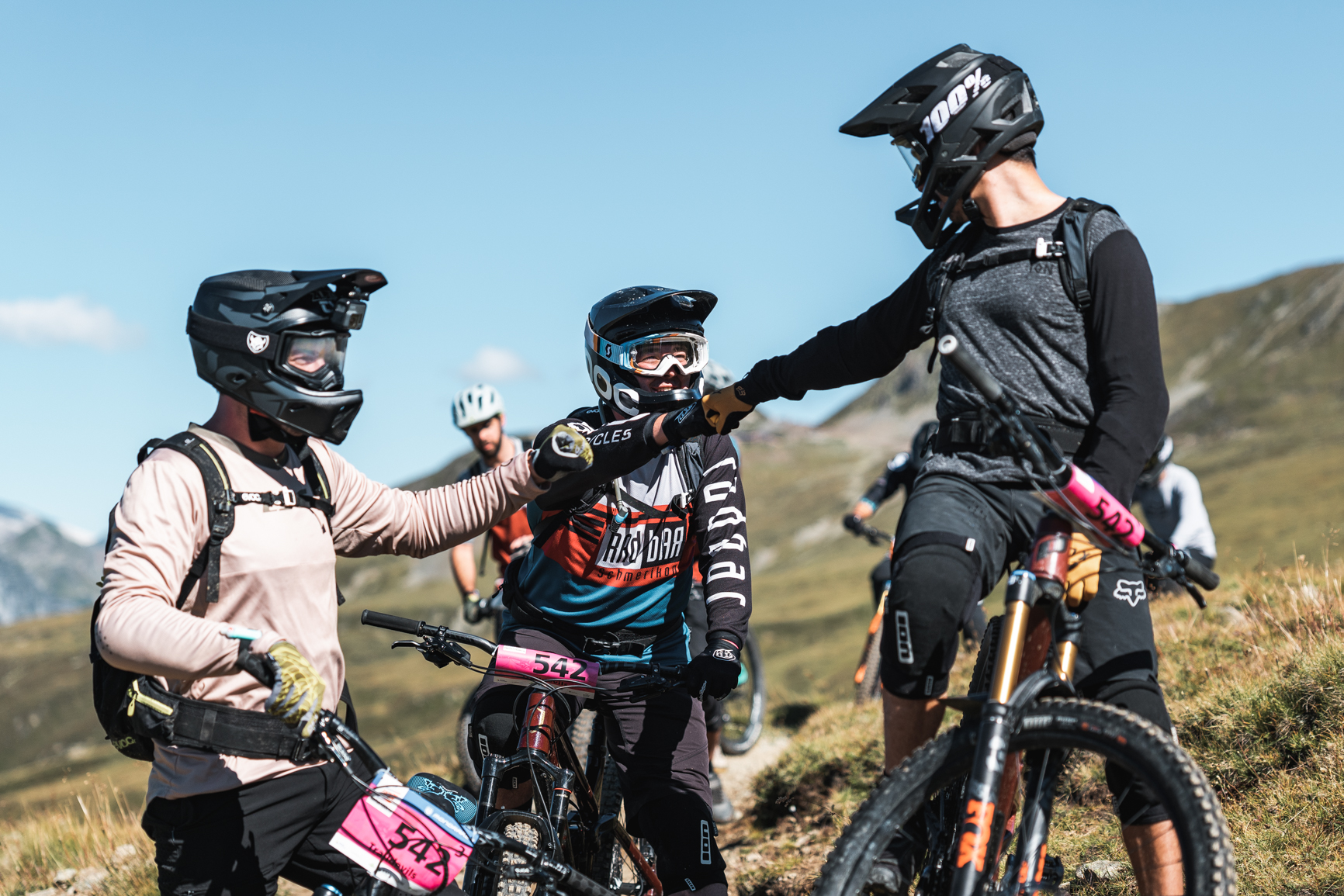 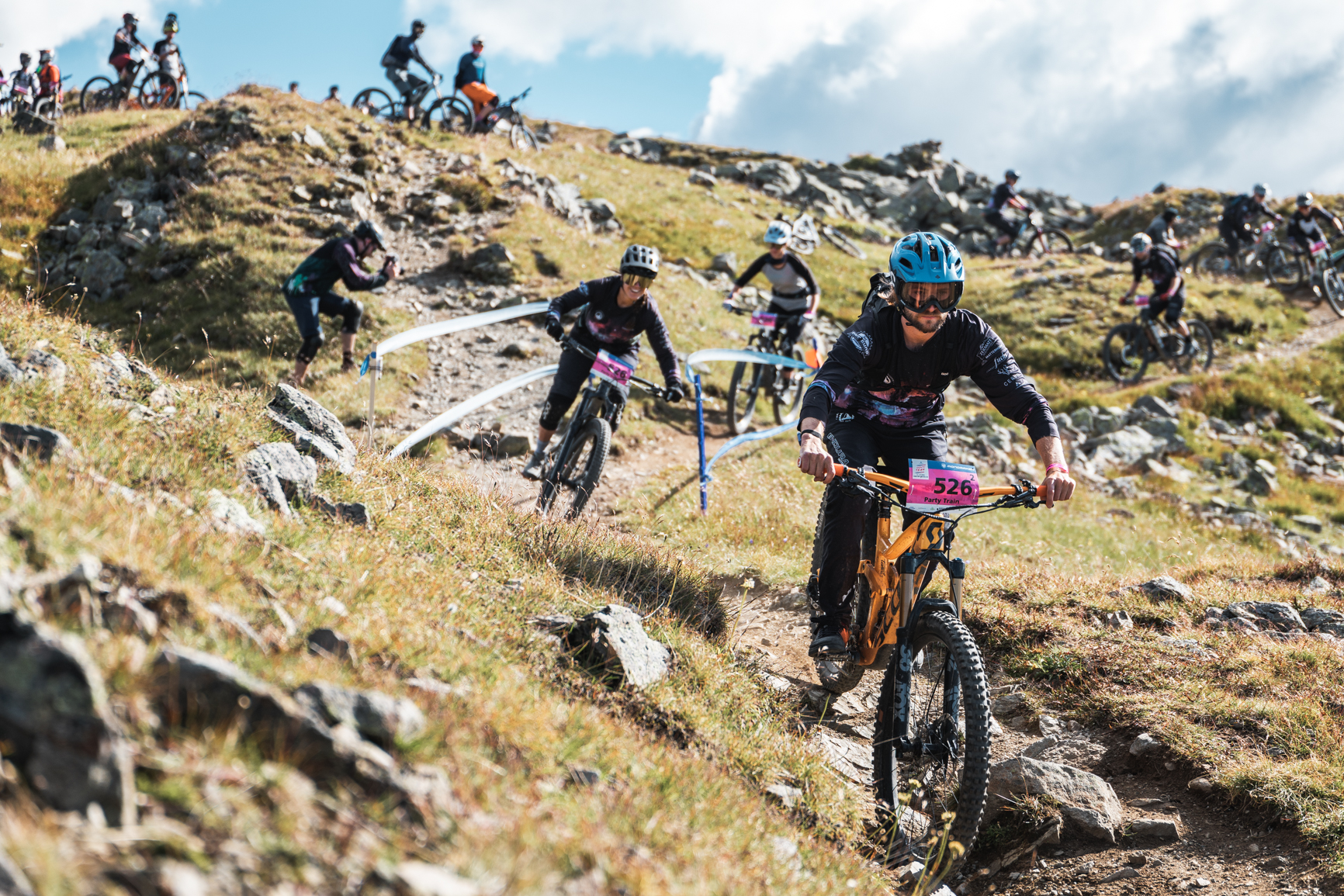 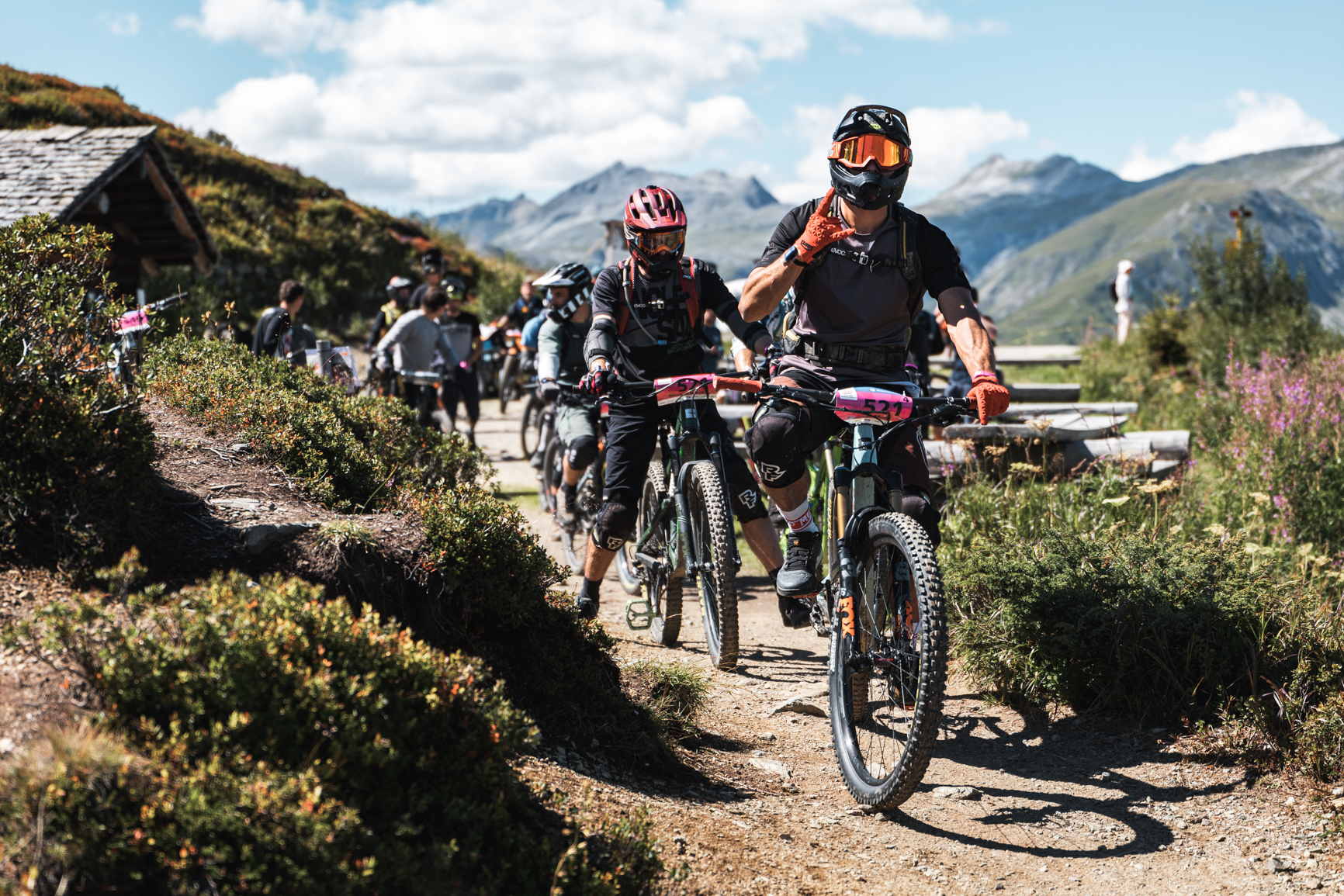 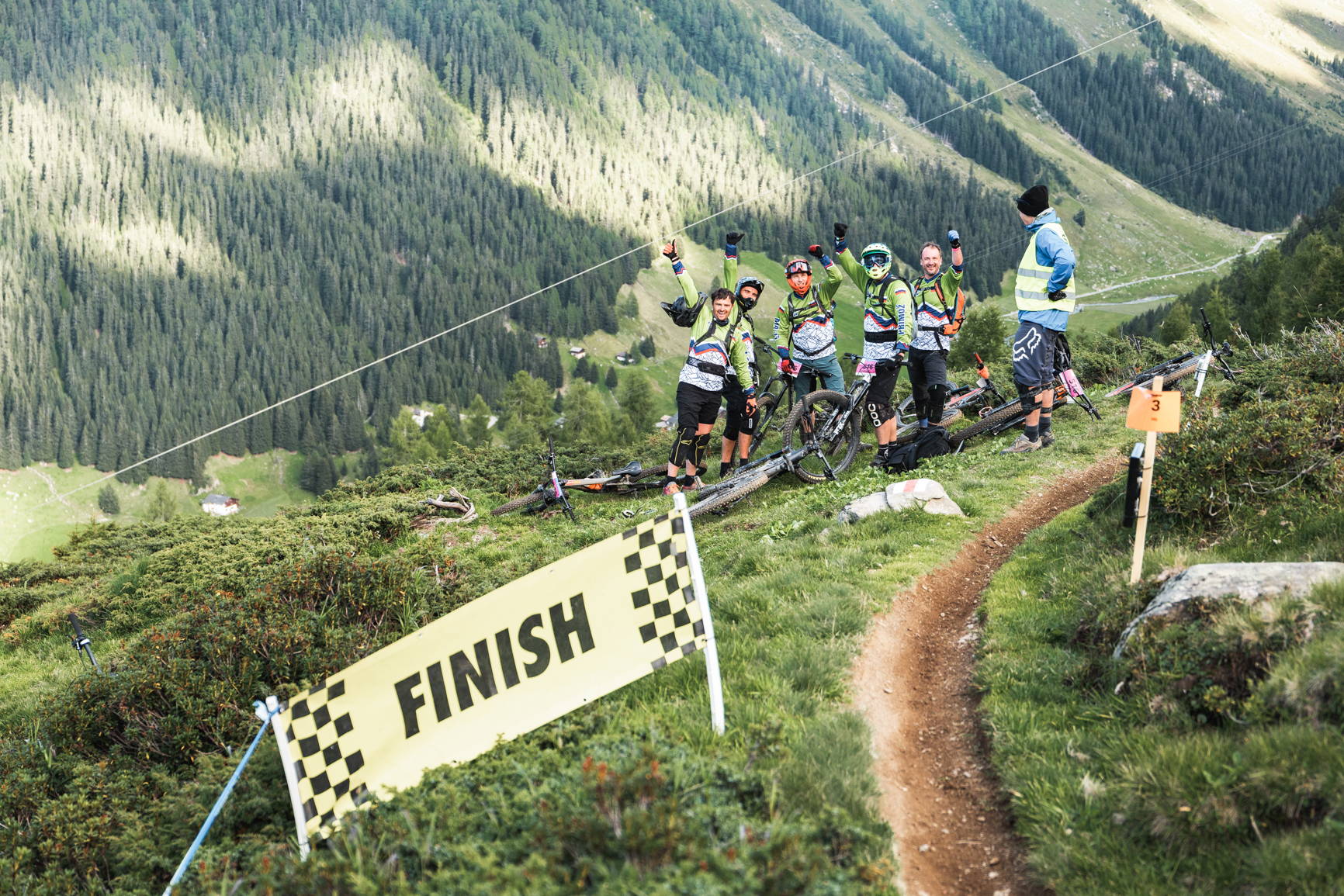