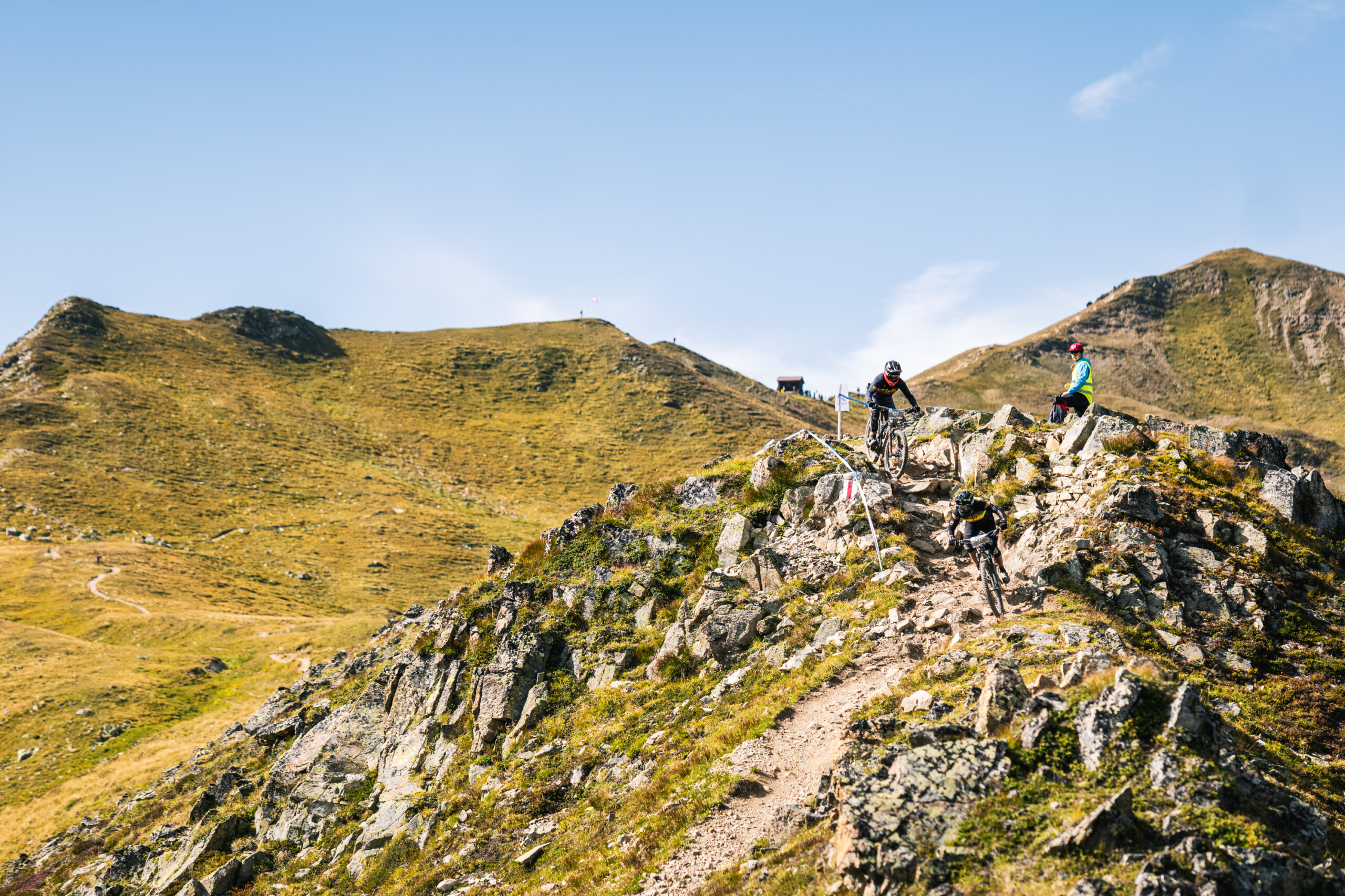 The fun mountain bike race MONDRAKER ENDURO TEAM in the Grisons destination of Davos Klosters will already take place for the fifth time from 2 to 4 September 2021 and has established itself accordingly: The event was completely sold out within just four days, 70 teams are still on the waiting list. It is one of the rare enduro races for teams in Europe and is accordingly popular in the international mountain bike scene. For the 450 lucky participants, the focus lies on the first-class trails of the Davos Klosters region as well as on the collegiality. This is also shown by the fact that some 40% of the riders do not start in teams of two, but in the open category FUN TEAM of 3 to 6 people, which was launched only last year.

"It was absolutely crazy", organiser Britta Wild says, still shaking her head. "Only three days after we opened registration, the FUN TEAM category was already fully booked, and one day later all the starting places for teams of two were gone too!" This is a record with new dimensions. "Obviously, our fun race exactly meets todays requirements. That's why we are particularly pleased that our new, open FUN TEAM category, which was launched in 2020 and has never been seen before in Enduro racing, has been sold out so quickly!" Because true to the motto "even more fun for bikers by bikers", the idea of camaraderie is even more in focus here. The event’s 450 riders will be starting in 190 teams, 45 of them are FUN TEAMS of 3 to 6 people, the others are teams of two in the categories MEN, WOMEN, MIXED and 77+.

160 Kilometres and 14 Stages for even More Trail Fun
During the three racing days, the participants will ride several "stages", i.e. measured sections that mainly lead downhill and last a few minutes each, just like in a common enduro race. This year there are 14 stages, a bit more than in previous years. The total distance is also somewhat longer, with almost 160 kilometres, over 10’000 metres of downhill and some 1’900 metres of ascent. That means nothing else but even more trails and more fun. "Approximately one third of the stages are new – i.e. tracks that have never been ridden in the previous four editions of MONDRAKER ENDURO TEAM", race director Michi Wild from the Bike Academy Davos says. "Thanks to the almost countless number of trails in the Davos Klosters region, we can always make the event tempting again for the many returning riders. In addition, this year we have changed the sequence of the course considerably, which results in fresh, exciting trail combinations." The grand finale will be the last stage, which only opened mid-August and leads directly to the finish area at the Bolgen Plaza on a newly created trail – goose bumps guaranteed!

Comradeship as the Core Idea
The trails are varied and attractive – but sometimes also technically demanding, as they are nearly all alpine, natural trails and no men-built flow trails. A certain level of riding on the mountain bike therefore is a must for a lot of fun at MONDRAKER ENDURO TEAM. “Our goal is to show experienced mountain bikers the most beautiful trails of the destination Davos Klosters in best company”, says Britta Wild from the very small organising committee. Between the thrilling descents, the participants cover various transfer stages without time measurement, often supported by mountain railways. These transfers give time to enjoy the impressive alpine scenery of the Grisons mountains as well as the comradeship amongst the international mountain bike community – the core idea of the event, next to the first-class single trails. That's why the big final party on Saturday evening is so important: "We are confident that we can hold the ENDURO TEAM Night in the Bolgen Plaza again this year, in compliance with protective measures respectively with Covid certification of all those present. This big get-together of the international mountain bike family is simply the culmination for our event.”

Single Trail World Record Holder Ralph Van Den Berg Starting
Although MONDRAKER ENDURO TEAM is all about having fun, there are again names with racing ambitions on the start list. In the MEN category, Stefan Peter and Mike Schuler, last year's second and third, are back – they have already proven being fast several times. Special attention will also be paid to Ralph Van Den Berg: In July he set a new single trail world record with 20’845 metres of descent in one day – in Davos Klosters. He should therefore have recently ridden most of the trails of the event in race mode and be familiar with the terrain accordingly. In the women's category, the sisters Ramona and Jennifer Kupferschmied, who have already come second several times, will be starting again and are once again flirting with victory – however, Jeanette Mayr and Berit Diel, the strong third-place finishers from last year, will also be back. The 77+ category will also be exciting, because all three podium teams from last year are in again with identical line-ups: Philipp Buchs and Marco Odermatt will again duel with the almost legendary Tanner Twins, chased by Patrick Matt and Roni Amstutz. And although the fun teams are even more focused on fun, the Flying Hamsters, who came second in 2020, will certainly go full gas again this year. A total of 17 nations are on the start list, mainly from Europe, but some even from overseas. Let's hope that they can all travel to Switzerland this year as planned.

Still Looking for Biking Volunteers
"As a non-commercial association, MONDRAKER ENDURO TEAM depends on around 60 to 70 volunteers – especially also on good bikers for course security," explains organiser Britta Wild. So if you haven't been able to get a starting place for the race, which has been sold out for a long time, as a volunteer you have the perfect opportunity to ride the trails of the race course even without a starting number and to be part of the event up close. Those interested can apply directly via the Swiss Volunteers platform at www.enduro-team.ch/en/helfer. Mondraker is the title sponsor already for the third year. Furthermore, the organizing com¬mittee is supported by the Davos Klosters mountain railways and the Tourism Orga¬ni-zation. "Without these partnerships, we would definitely not be able to manage the event," says Britta Wild. But also the work of the Trail Crew Davos, who keeps the trails of the area in good shape, is indispensable. "We are also supported by Graubünden Sport and maintain partnerships with various recognized bike hotels in town," explains Britta Wild.

Spectators Welcome
Spectators are also welcome at the mountain bike race. "The event area is located at Chalet After7 in Davos Platz, next to the valley station of the Jakobshorn cable car", explains Britta Wild. "From 8 am onwards you can watch the race’s start, and around mid-afternoon the riders will gradually cross the finish line. There is food & drinks as well." Spectators can also watch the race on the course from a little distance. Which trail sections will be used at what times will be posted shortly before the race at the mountain railways. 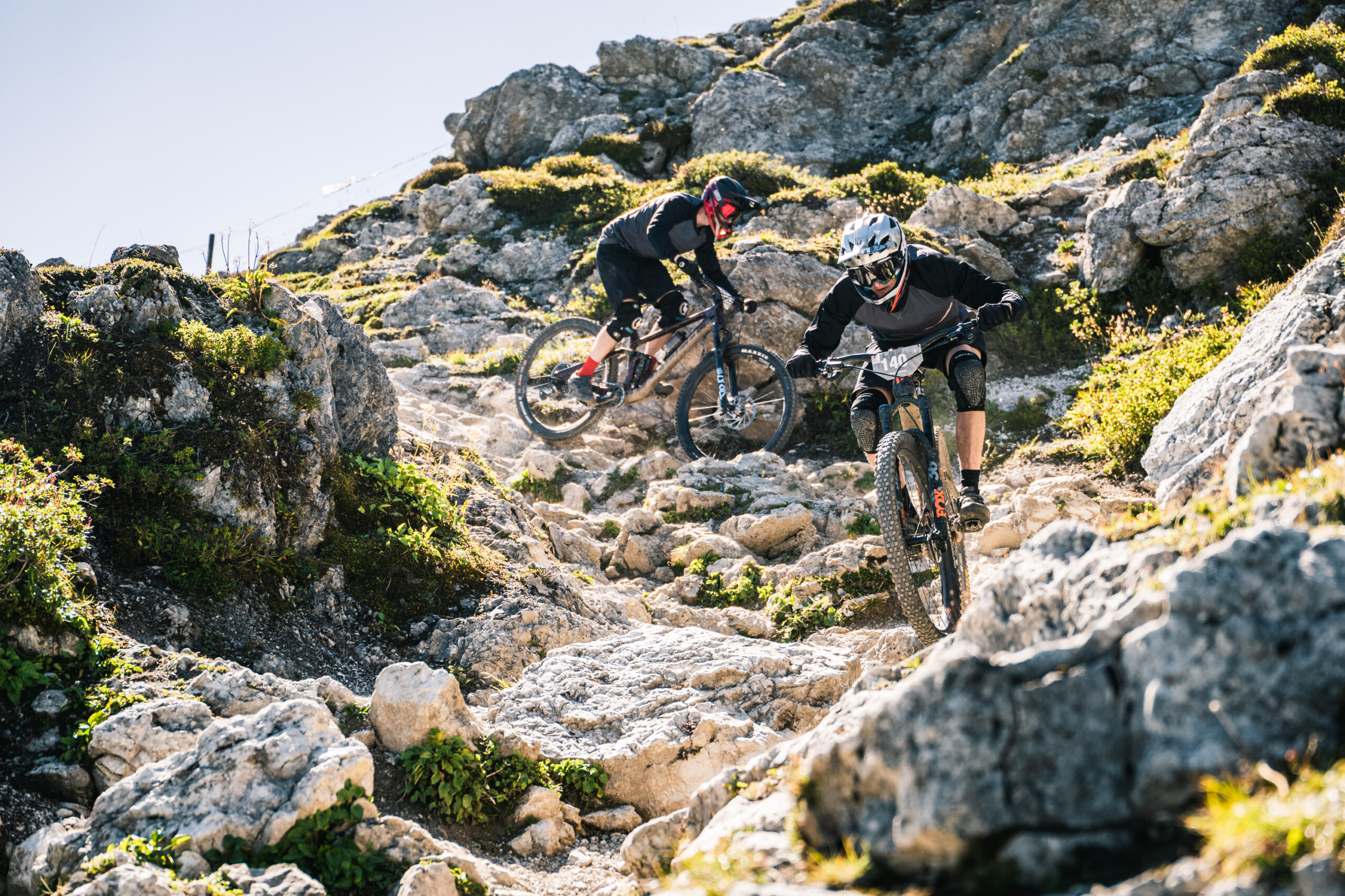 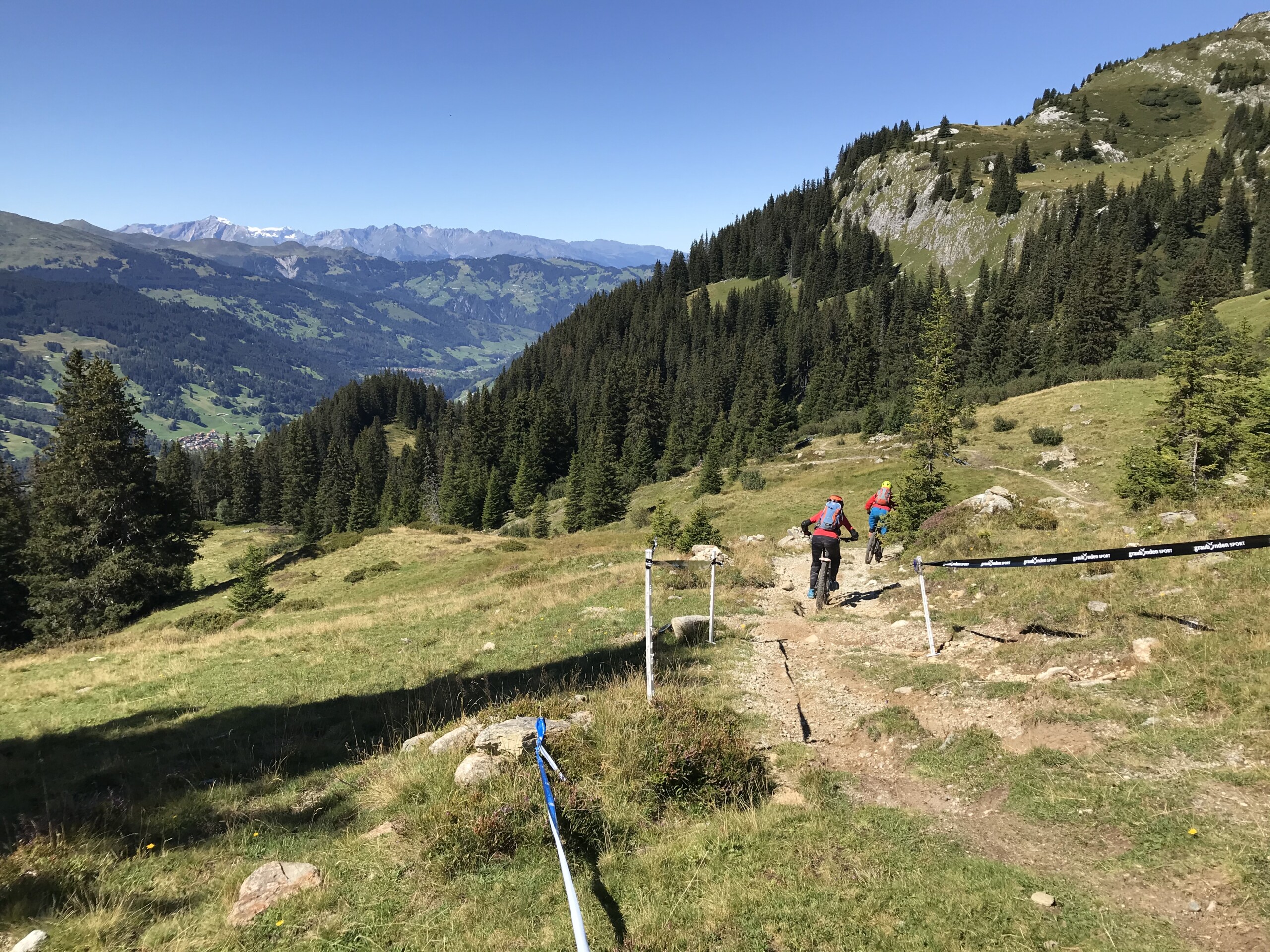 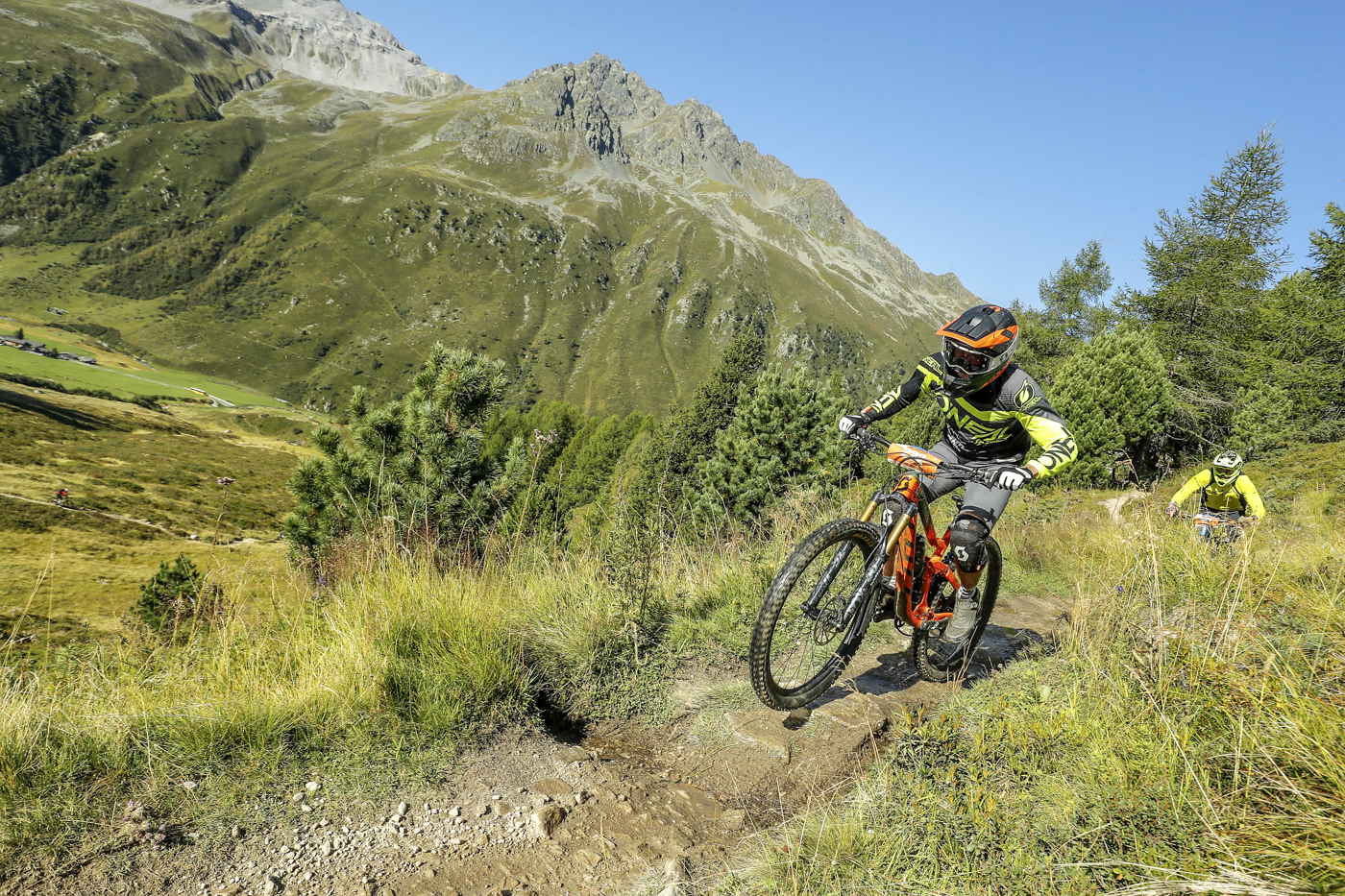 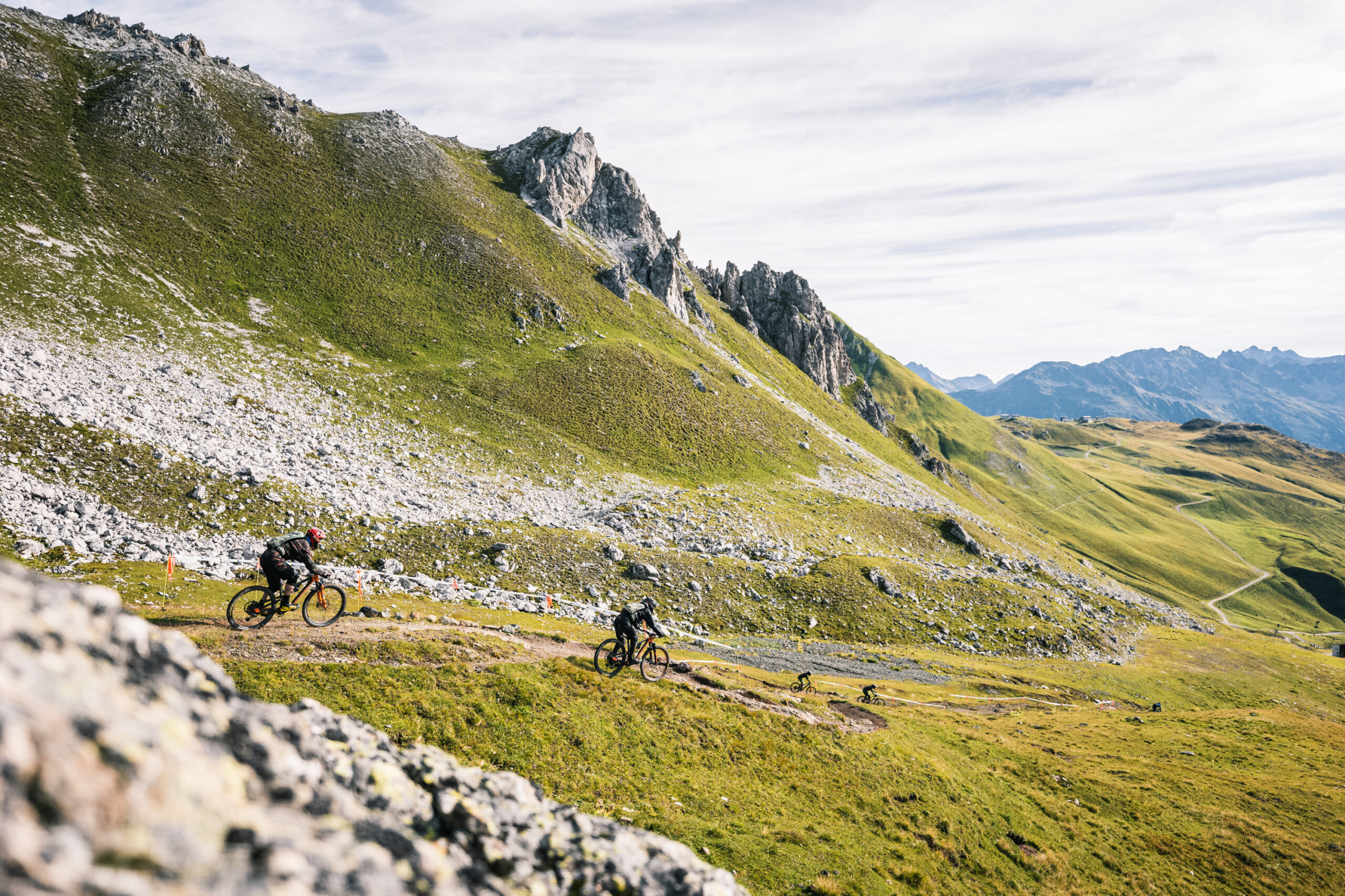 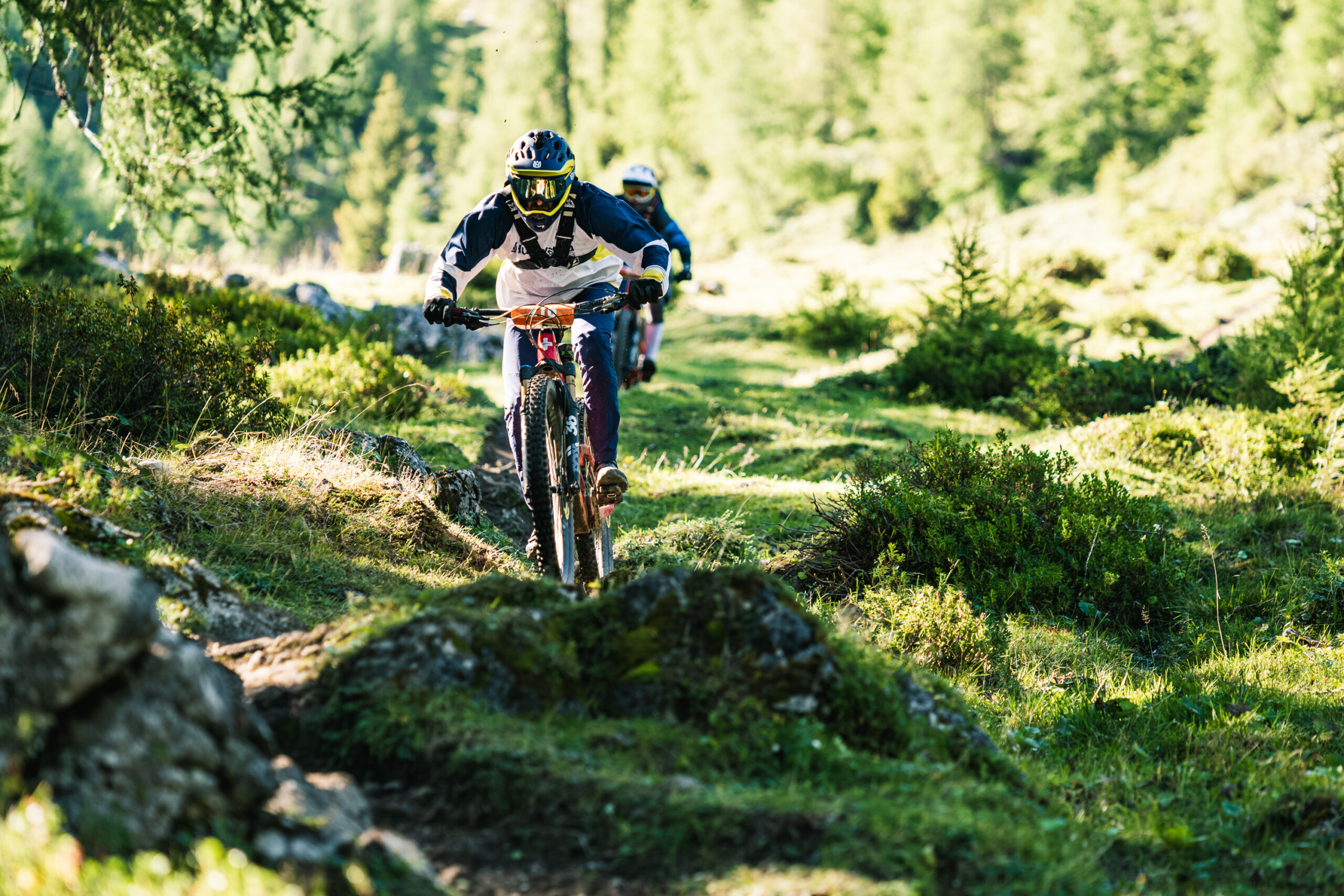