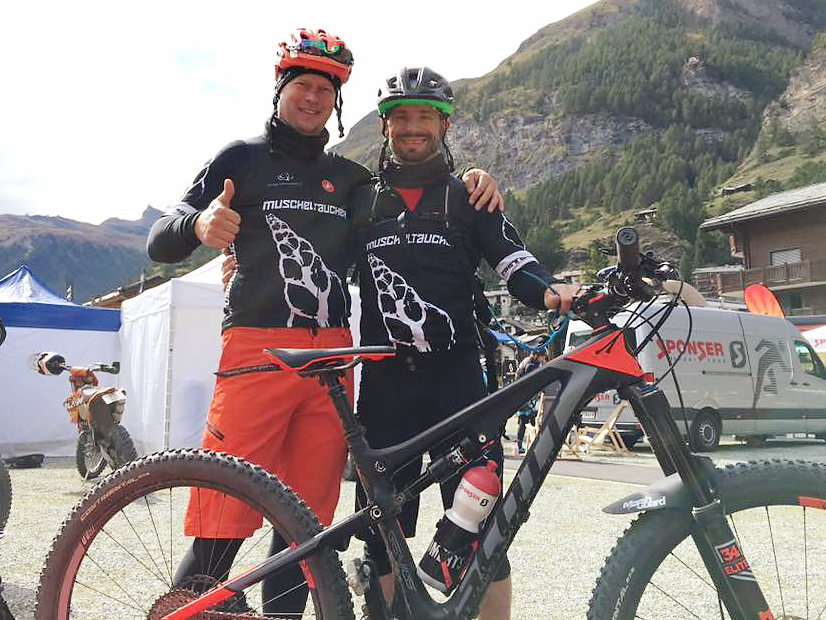 As team „Long live Kräutersammler“ (Herb Collectors), Pascal Bollier and Bernie Senn have a very sad reason for their participation at Mondraker Enduro2: They ride in memory of their friend and family father Michael Monstein, who died of cancer in January at only 40 years. Read in our series „3 questions for…“ how the team name came about, why important things should never be postponed and how you can do your bit to support children with cancer, even though help came too late for Michael.

Mondraker Enduro2: Your team name „Long live Kräutersammler“ has a very special and sad background. What is the story behind it? Pascal Bollier: Bernie and I lost our very good and close friend Michael Monstein to cancer at the beginning of the year. I knew him since school and Bernie had known him for many years as well. There are so many things we wanted to do with Michael as soon as he defeated the cancer. A lot of things we postponed for too long, only realising how important they are, when Michaels time suddenly seemed to have come: Mountain biking in Moab, undertaking activities together with him, his wife and his two bright children, or participating in a bike event like this one in the same team. Unfortunately, we can no longer experience all these adventures with our friend „Monstein“… However, we still want to take him with us on our adventures and revive the memories of him again and again. That’s why Bernie and I decided to ride the Mondraker Enduro2 together, in memory of our deceased friend Michael. Our team name consists of two elements: One is a reference to „Long live Chainsaw“, the memory of the accidental death of the Canadian downhiller Stevie Smith, nicknamed Chainsaw. We loved his section from the mountain bike movie „Four Seasons“ – and it had definitely infected Michael with the bike virus. „Kräutersammler” or “Herb Collectors“ was the team name under which Michael participated in many mountain bike events with his friend Alex Stratz. Michael was very enthusiastic. As „Herb Collectors“ he was always fully motivated and pursued his goal with a lot of enthusiasm, aiming not to be at the finsih line last – and above all to have a lot of fun on the trails. Most of the time he managed to do both in a very creative way. 🙂

Mondraker Enduro2: What would your friend Michael say, if he knew about your commemoration at Mondraker Enduro2? Pascal Bollier / Bernie Senn: He would probably be very happy and we think that the spirit would be very much in his sense. However, when we were at this kind of competitions together, he would always tease us with a mischievous grin, telling us that we should „go for the title“. He and Alex would then fight from the rear of the field – after all, the name „Herb Collectors“ would be an obligation… So, he would expect full commitment from us. But since we ride under the name „Kräutersammler“, for which he and Alex have the copyright, it would probably also be very important to him that we enjoy the trails as much as he did every time. And maybe not to be last, even though we have become oldies on the bike in the meantime…

Mondraker Enduro2: What else do you want to tell us or what would Michael want to give us? Pascal Bollier / Bernie Senn: It means a lot to us to remember Michael actively. He loved the mountains and mountain biking was our common passion – even if our competition goals were always on opposite ends. This never mattered in his exuberant narratives, only the common spirit was of importance. That is why we are here. Michaels countless funny and bizarre stories have to remain alive, especially for his children. What Michael would want to give us? He would certainly have a lot to say. He always had – constantly brimming with ideas and he loved philosophizing. None of us can speak in his place – he simply was too authentic and original. But after his hard and in the end hopeless 1 ½ year battle with cancer, we all became aware of the fact that plans with friends should never be postponed! Make it happen while you can – it can suddenly be too late… In thought, Michael is with us, in every turn, every jump and every trail. A loud „Viva la Grischa“ and a Monstein beer afterwards are part of it. To you, our friend: „VIVA!” 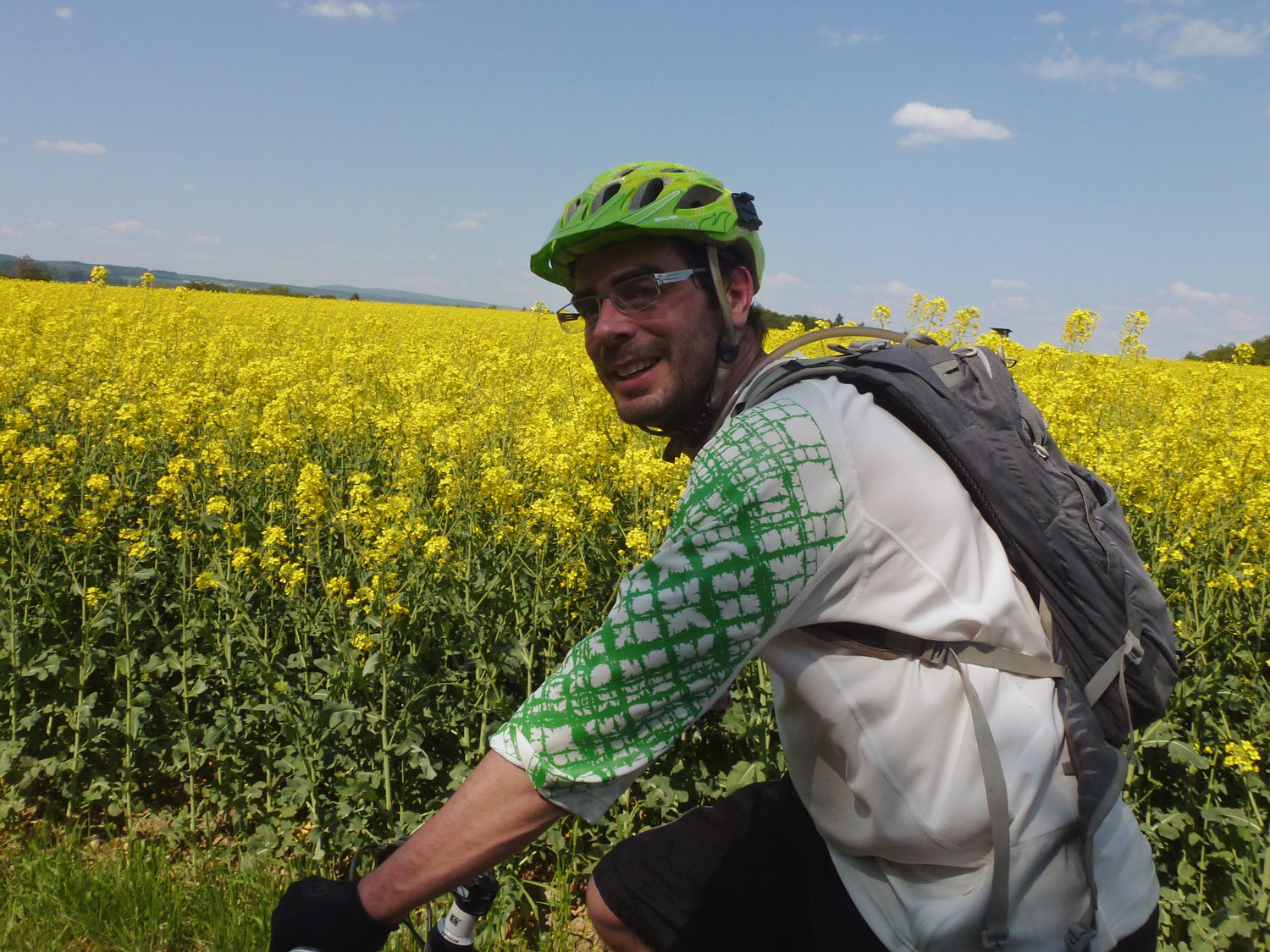 Deceased friend Michael Monstein on his bike when he was still alive. In thought of you! 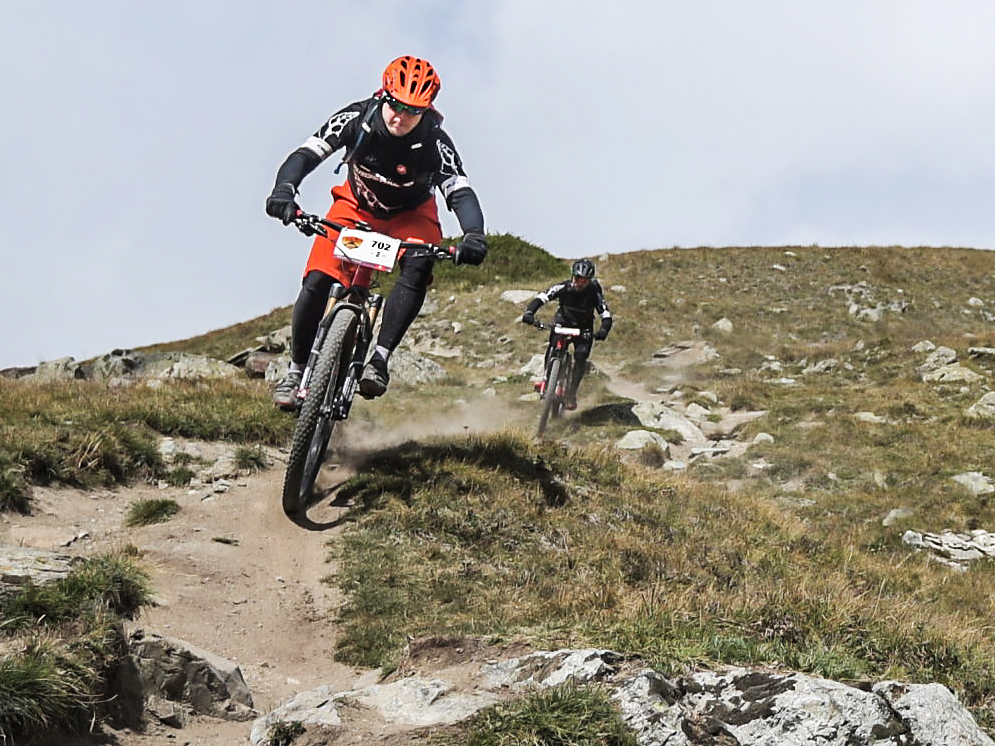 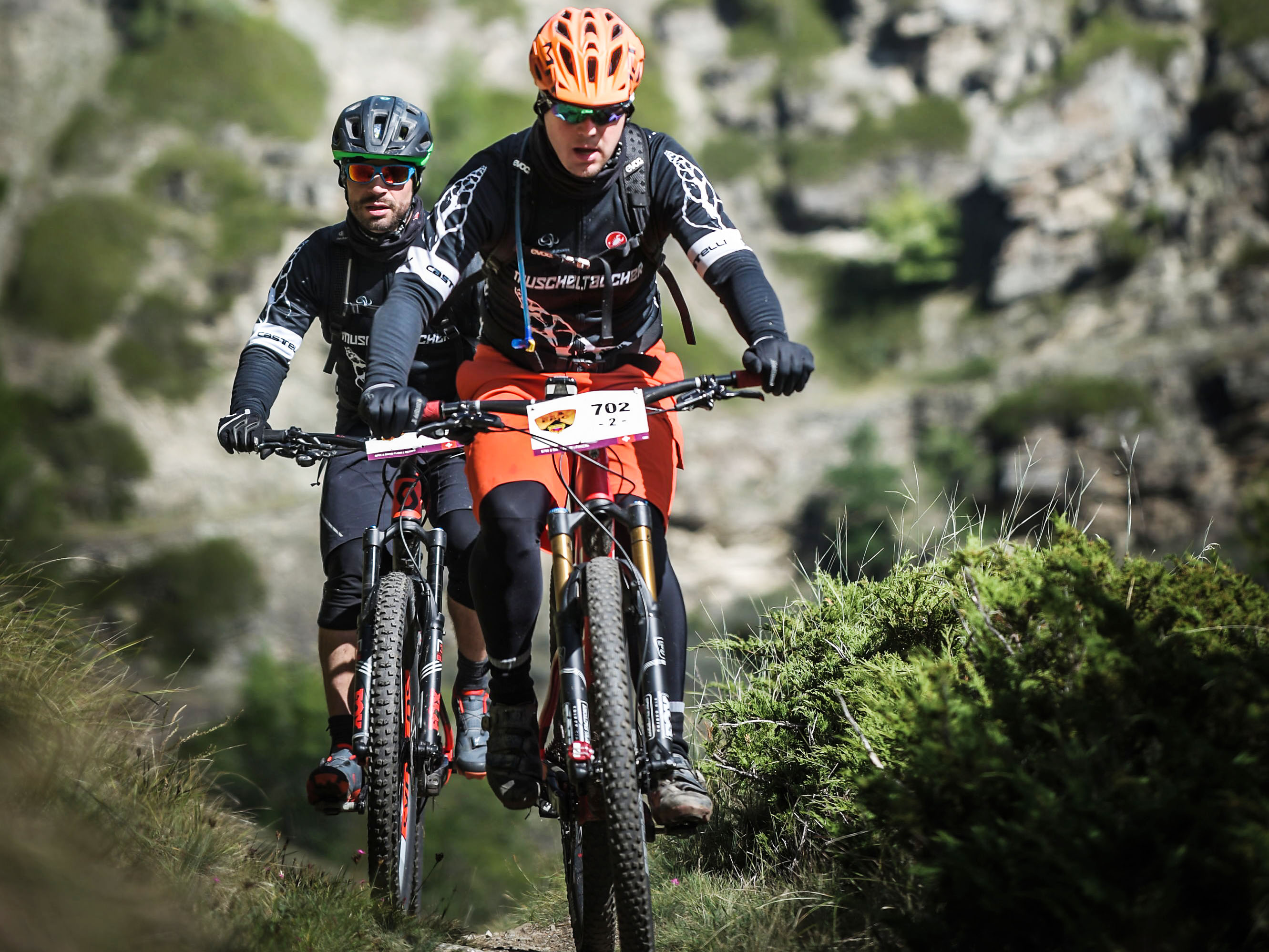 Pascal Bollier and Bernie Senn on the trails 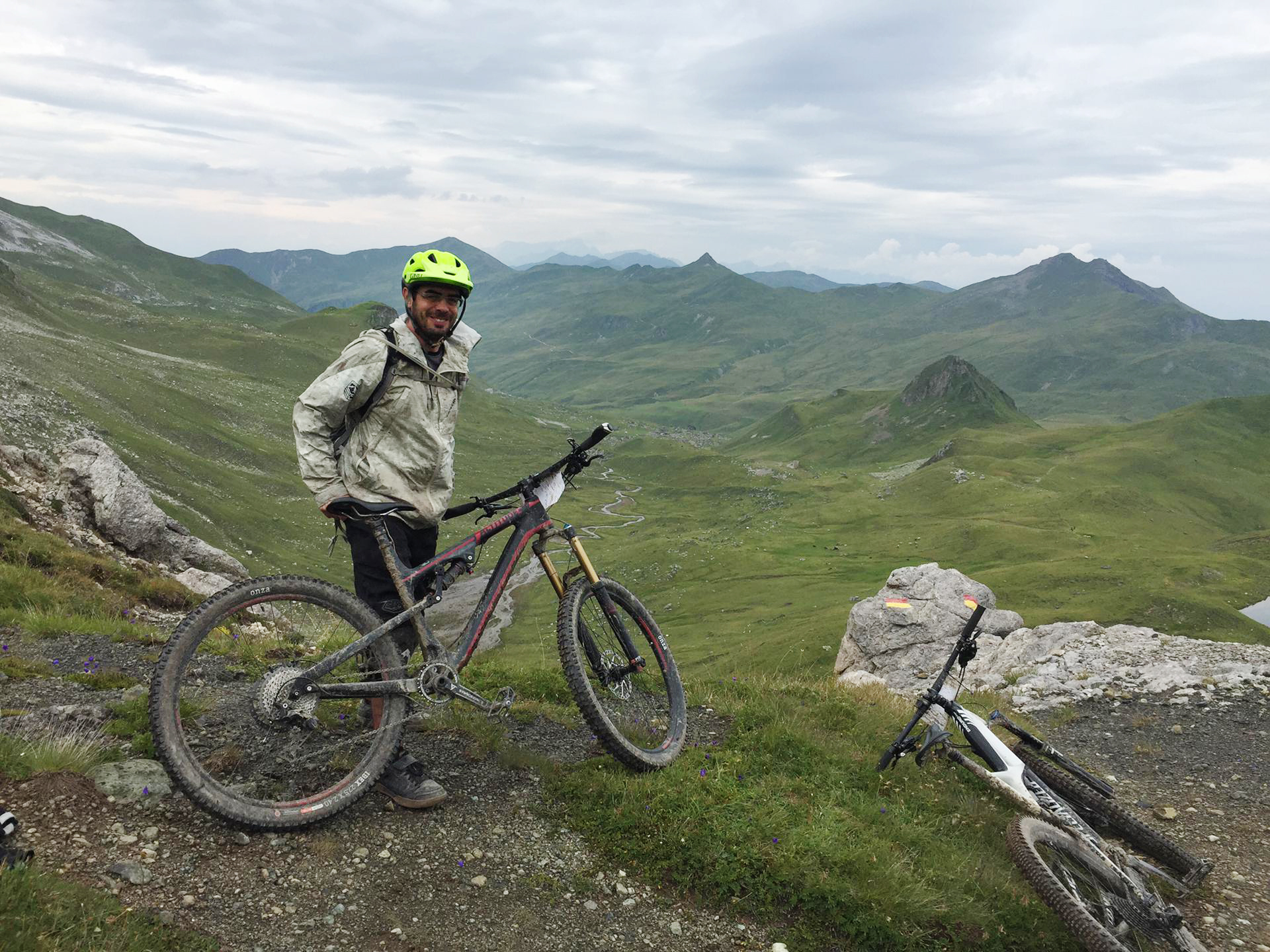 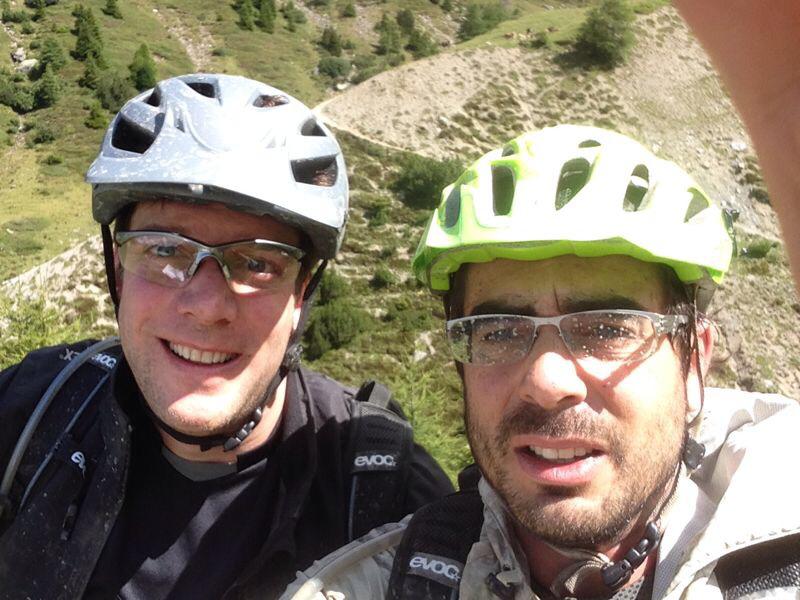