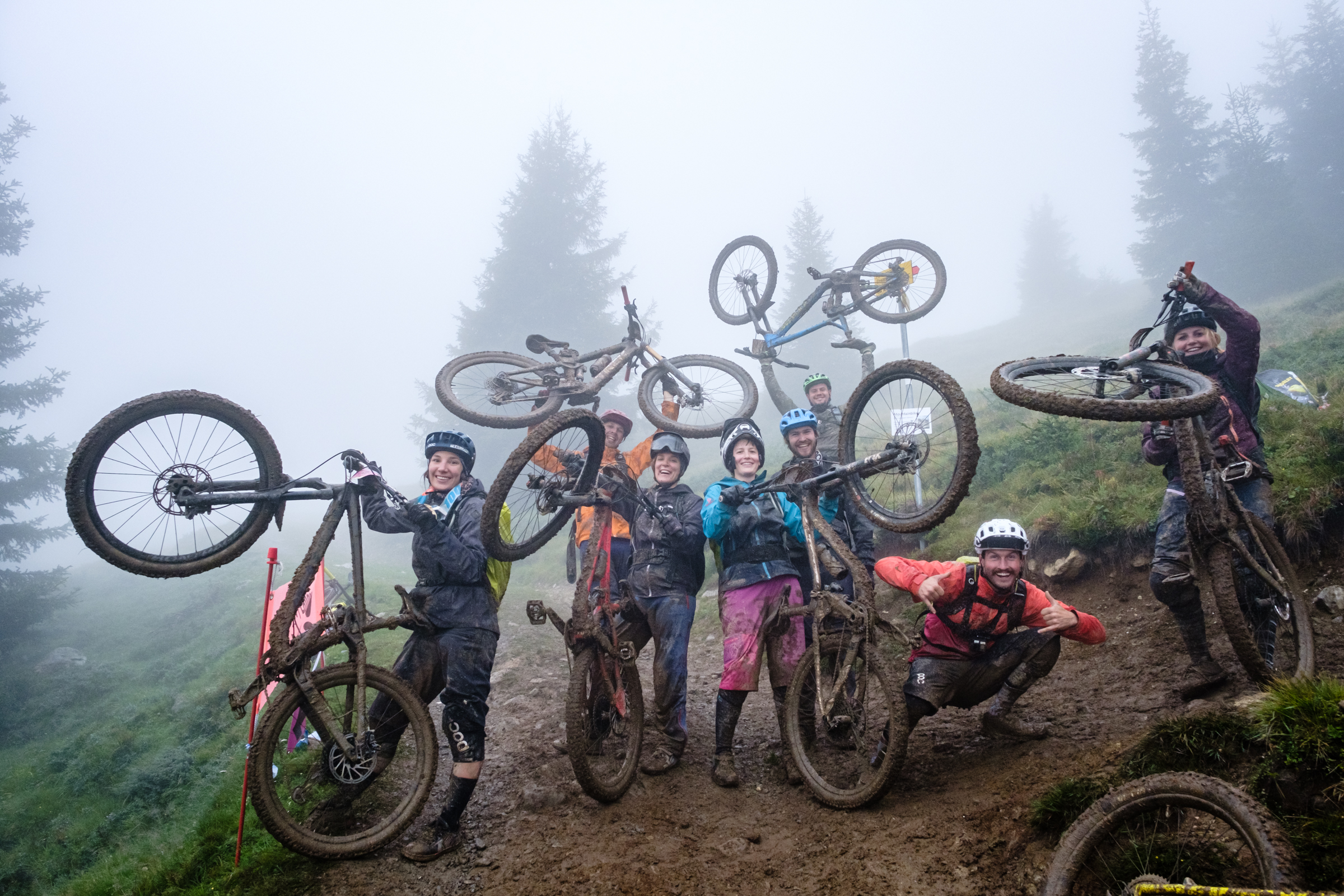 From 5th to 7th September 2019, the international enduro mountain bike scene met in Davos, Switzerland, for the 3rd edition of the Mondraker Enduro2, a race for teams of two with an extremely high fun factor. Despite the nasty and cold weather with rain and even snow, the 450 riders enjoyed the alpine race on the first-class trails around the destination of Davos Klosters, and the extraordinary sportsmanship within the international mountain biking community. In future, the event will take place under the name MONDRAKER ENDURO TEAM.

Rain, snow and the cold could not dampen the good mood. Despite the weather, the event and the Davos Klosters region were once again very well received by the international participants: "The trails are simply perfect even with rain and snow", "endless dirt and fun", or "the coolest and most flexible mountain bike event far and wide!” was the unanimous feedback of the 225 tough teams of two from 24 nations from Europe and the whole world, who have covered 9 stages on their bikes in the last three days. Originally there were 13 planned stages, but due to snow and landslides, some of them had to be cancelled at short notice. On the transfer stages in between, often supported by mountain railways, the clock was stopped and the riders had time to chat with participants from foreign countries and live the international mountain bike community. The impressive alpine scenery of the Grisons mountains unfortunately was hidden in the clouds – however, every one had a lot of fun.

Winning is secondary
In the Mens category, basically the same teams as last year fought for the top places. In the end, the race was again won by the WHEELER - iXS team with Stefan Peter and Tim Bratsch with 1h 03min 38sec, a bit more than a minute ahead of Nick Beer and Daniel Eymann of the team mtbeer.ch - BiXS - DT Swiss. The British team The Dudes of Hazzard with Liam Moynihan and James Shirley finished 3rd.
In the newly created 77+ category, the Tanner twins Jürg and Markus Tanner won after they had to settle for a lower ranking last year due to illness. 2nd place went to team fusion-world.ch/bikeride.ch with Othmar Künzli and Anthony Mayr, 3rd place went to the Old Brothers BC Titlis with Dany Häfliger and Fredy Rohrer.
In the Mixed category, team NonDeBizz with Sébastien Angiolini and Clivia Gobat took the win. However, snowboard pro Nevin Galmarini proved to be very fast on the bike as well and became 2nd, together with team mate Stefanie Thalmann, as team Love the ride / No shortcuts. 3rd place went to the SWOOTH VOJO TEAM from Belgium, with Tim Jacobs and Kristien Achten.
In the women's category, the favourites Anita and Carolin Gehrig from Team Norco Twins Racing clearly prevailed with 1h 17min 17sec, a good 7 minutes ahead of the other sisters Ramona and Jennifer Kupferschmied, Team Swiss MTB Girls powered by STOLL. 3rd place went to Daniela Michel and Anja Rohrer from Team FlitzChicks RC Steffisburg.
Despite some close battles on the trails, everyone agrees: In this fun team event winning is secondary, fun is everything.

Conclusion: Fantastic mountain bike festival despite nasty weather
For the organizing committee, the extreme weather conditions became a really big challenge. "Our goal was to show experienced mountain bikers from all over the world the most beautiful trails of the destination Davos Klosters in the best company", Britta Wild sums up. "We finally succeeded again, despite the rain and snow. It was, once again, another fantastic mountain bike festival!” Race director Michi Wild is also satisfied with the event: "Because of the really bad weather we had to be extremely flexible and decide on a daily basis which stages we’re able to ride. Fortunately, we are a well-functioning team and the Davos Klosters mountain railways, which make the event possible thanks to their transportation network, always handled our short-term changes brilliantly! Like this, the riders were always in a great mood, despite the dirt and cold." A big thank you also goes to the 50 volunteers, without whom the event could not have taken place.

2020: fourth edition under new name MONDRAKER ENDURO TEAM
Next year, the established team enduro fun race for experienced mountain bikers will take place again in Davos Klosters, from September 3 to 5, 2020. The event will run under the new name MONDRAKER ENDURO TEAM: "The basic idea, the proven and appreciated ideology and the organizing committee will remain the same”, Britta Wild promises and explains: “We still have a lot of ideas to further develop our independent fun event, always following the motto, more fun for bikers by bikers. The new name offers more options – just wait for the surprise!” Information on the extended concept and the possibility to register will follow in autumn 2019. With the changing of the name, a new website has already been released: www.enduro-team.ch aufgeschaltet.

Rankings 2019
You can find all the rankings of Mondraker Enduro2 2019 here:
https://timing.sportident.com/de/results/2019/enduro2